Crikey, it’s been a bit of a while since I last updated this blog, hasn’t it?

Well, it’s not for lack of action. Quite the contrary… I’ve been so busy with all sorts of stuff I don’t really get time to sit and write blogs. A lot of the updates I share (as do many others, I’m sure) are now on Facebook and Twitter.

In the past few years I’ve really grown as a solo artist, helped greatly by the wonderful folks at the White Horse Folk Club, Beverley, where I’ve recently done another full-length set. I’ve also been doing loads with Beggar’s Bridge, which has been, and continues to be, immense fun, especially since we added Dave Watts on violin and Spud on drums (though we still do some stripped-down acoustic sets as a three or four-piece). This year we’ll be playing at our first proper folk festivals – after badgering them for absolutely years we’re finally on at Beverley Folk Festival (date and stage TBC), and the New Forest Folk Festival, on July 8. This also happens to be my birthday… hint, hint…

I decided that, having released my first album back in 2012, it was high time I got another album together, so, after working on this for the past few months, Land and Sea is out now. I’m really proud of it, and I hope it’s well received.

I’ve made another radio appearance with Max Roberts, too – this time for Beverley FM. I’ll post the recording on my Soundcloud soon.

I’ve also been doing a lot more solo gigs lately, with the high spots being Hull Folk Festival – now rebranded Hull Folk & Maritime Festival – and the regular maritime concerts throughout the year, organised by Spare Hands, and taking place at Hull Maritime Museum and the Streetlife Museum. It’s great to be an integral part of these events alongside other acts such as Spare Hands, Hissyfit, Paul and Liz Davenport, Shanty Jack, Brian Nelson, Jim Eldon and many others. I’ve also very much enjoyed joining the ‘owld chunterers’ at the regular Wednesday afternoon sessions of the Hull & District Elderly Gentlemen’s Binge-Drinking Club, in Ye Olde Black Boy, in Hull’s Old Town. You don’t need to be elderly, or a gentleman – but a thirst for ale does help, admittedly…

The reason I don’t push myself to do more solo stuff is, quite simply, down to time, and the fact I risk taking my eye off the ball in terms of the day job if I spread myself too thinly. I run my own business (in a different guise, I am the editor and publisher of H&E naturist magazine) and this, as you may imagine, takes up most of my time. I am the chief cook and bottle washer, quite literally… I work from home, and the job involves doing all the admin, marketing, advertising, layout, design, some writing, etc, etc. 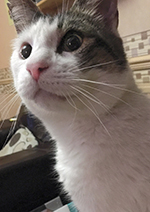 I must also mention that I lost a much-loved little ‘colleague’ in January. My cat Billy was a part of our household for more than seven years, and he very sadly died after being hit by a car (we believe). I and my partner Martin (also of Beggar’s Bridge) were utterly devastated. If you don’t have pets you won’t know the strong bond that can grow between humans and animals, but this little guy was simply a part of our family, and we still miss him greatly. He was a rescue cat from the RSPCA, and I figured that I should offer our home up to another. Well… ‘another’ turned out to be two, and I now have George and Lucas running about the house. (Martin is a Star Wars fan… nuff said.) They’ll never replace Billy but, having come from the Cats Protection, they now have a loving home.

Anyway, please keep in touch with what I’m up to by visiting my Facebook or Twitter pages, and thanks for reading!